Below you will find an Envirometer diagram for the average garage. This graph is based on the Envirometers of twenty-one garages (a combination of private garages, most with a showroom, and lorry garages). Bodyshops were not included in this average.

Many environmental aspects proved equally important to all garages; however, four themes were identified that comprise more than 10% of the environmental impact, followed by commercial waste at 4,8%. Electricity and business transport were clearly the key aspects. 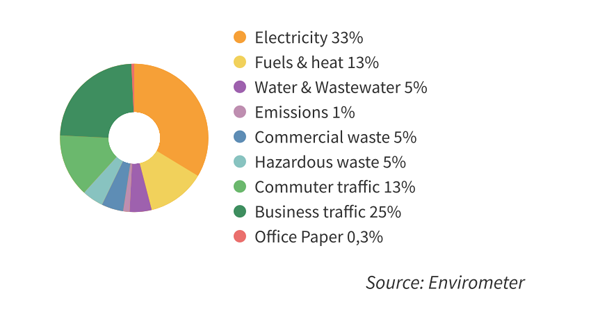 The most interesting/relevant key figures in the garage Envirometer have been included below. Once you have created your own Envirometer, you can compare your key figures to the averages and display additional figures.

* All energy flows for heating *(natural gas, city heat, wood chips) have been included under ‘fuel’ and converted into natural gas equivalents.

Comparing your score to the average

Complete your own Envirometer to compare your own graphs and figures to the average.

Source of this average Envirometer

In 2014, the Stimular Foundation was commissioned by ECN to calculate the average energy consumption of garages. The companies (Envirometer users) gave their permission to use the data in their Envirometers to generate an average Envirometer for garages. This consists of both lorry and private garages.

“Our records were already fairly extensive, but the Enviro­meter brings all the environmental data together in one place. The first couple of years I had to come up with an estimate for some of the things, but over the years our measurements have become increasingly accurate. Every year I send our Environment Agency the Envirometer report, which is a straightforward matter. ”

“Van Tilburg Bastianen uses the Envirometer for all its offices. It calculates all the efficiency indicators that are needed for the BOVAG ‘Approved Sustainability’ certificate. We also use it to compare our branches.”